Author: admin
Similar threads at Go Heavy and T-Nation originally started by the same poster. Both are trying to put together a list of all of the 1,000 pound, single ply squats where the lifter had to walk the weight out. So far they have:
Author: admin
If you've been thinking about purchasing a powerlifting training DVD or two check out this Monster Muscle thread. Posters are suggesting the best of the best and offering opinions on them. Hey it's Christmas, buying at least one will be okay!
Author: admin
A poster at Fortified Iron wonders what sort of mental processing other lifters do when squatting. Apparently, he has become so bogged down by the details of the lift that the lift itself is suffering. Answers include:

I think the squat is a lot like the bench in a sense that you have sort of a checklist that you should go through mentally every time, which includes set up, foot stance, pushing your stomach into your belt, putting your ass out, driving your knees out, etc...

Author: admin
A Monster Muscle thread is compiling opinions of who the most influential or important female lifters are of all time. So far, here's who they have:
Author: admin
Brad Madvig offers some clarification at the USAPL forum on the IPF rule which bans lifters who compete in non-sanctioned IPF events. The rule :

Any lifter, coach, referee or official who competes or participates in a Powerlifting or Bench Press competition not organised, sanctioned or approved by the IPF shall not be permitted to take part in any IPF international or regional competition for a period of 12 months from the date of that non-approved competition.

Author: admin
Gibson Powerlifting is looking at why the Russians are doing so well at powerlifting. One of the common reasons cited for why they perform so well is drugs. Jay Gibson discounts that:

Does anyone really believe that the American appetite for drugs and the creativity of American 'bathtubbers' will ever be surpassed, when it comes to drugs? This place takes a backseat to NO ONE.. Think about that, what is it that Americans have that Russians want and need? Powerlifting trophies? Millions of DOLLARS? You figure it out... Are we now saying that Russian lifters have more potent androgens than these? What are they? Seriously, dollars trump the living shit outta trophies and gold medals. Does anyone believe it would be a secrect that was kept?

Author: admin
Ok, not really. However, in this thread is discussion of a specific IPF rule change and a general discussion about the way the IPF does business. From the minutes of the 2005 IPF Congress meeting:

2) Change 14.9 Athletes Competing Participating in Non-IPF Competition Any lifter, coach, referee or official who competes or participates in a Powerlifting or Bench Press competition not organised, sanctioned or approved by the IPF shall not be permitted to take part in any IPF international or regional competition for a period of 12 months from the date of that non-approved competition. ** Accepted unanimously with amendments

So many muscles are involved in developing a good bench press, triceps, front delts, chest, lats, traps, and others, that sometimes the rear delts get lost in the mix. A Fortified Iron thread looks at some of the exercises which will strengthen those rear delts.

Most people instantly think of the reverse pec deck machine or reverse dumbell flies when trying to find an exercise to hit the rear delts. Check out the thread for lots of other good suggestions.

Author: admin
Bob Youngs has a new article over at EliteFTS entitled, Things I Would Do Differently. It's an interesting look at some of the things he would change if he could go back and do it all over again. Most of the time, it's good to listen to those that have been there.
Author: admin
A poster at APF Outlaws asks whether sumo and conventional stance deadlifts have different effects on the lower back, especially on the lower vertabrae. The responses all confirm that sumo can be much easier on that area:

Much less stress on L4 and L5 with sumo if puled right.

Author: admin
If you're into powerlifting, you've probably sat around and debated who the best powerlifters, benchers and lifters of today and all time are. But who are some of the most underrated? Monster Muscle asks for opinions. Lots of names from the past as well as lighter lifters are being suggested.
Author: admin
Lately there are more and more voices cropping up from within the pro-equipment crowd that are saying equipment is fine as long as it's kept to single ply. This Monster Muscle thread is discussing just that topic.

i think that any peice of equippment that isnt single ply poly is bull shit.

That poster gets an earful from many subsequent posters:

I think it's funny when someone *****es about how crazy gear is getting, and then extols the virtue of single-ply gear. My bench in a off-the-shelf 1-ply Fury is a good 25% higher than my raw press. IPF-legal gear certainly ain't what is was in 1990.

I think when the question of overtraining comes up, instead ask a few questions: 1) Am I getting enough sleep? 2) Am I getting enough good food? 3) Is there anything additional life has hit me with lately? 4) What's my current workload for training and what have I changed lately? In my opinion, true overtraining, where your sleep and eating is affected, motivation is low, headaches, etc. doesn't happen very often at all. And a lot of it can probably be blamed on other factors such as adequate diet and sleep, active recovery, additional stress from life, work, etc. A better way of thinking of it is in terms of work capacity.

Author: admin
An interesting thread over at Go Heavy which is looking at how a unified powerlifting might look in the future.

What is your opinion: would it be better to pursue the direction the IPF is taking, or to provide a greater "show" for the audience (WPC/WPO). Personally I'd go with the former. Although the showy competition is surely a faster way to gain popularity, I feel in the long run it would be better for the sport to keep things more serious and disciplined. 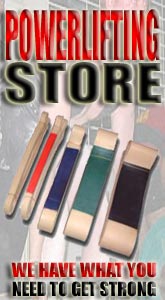