The South African Powerlifting Championships concluded the past weekend in a small town in the Free State, home of multi national champion, Pieter Erasmus. At the AGM on Friday the SAPF selected a new Vice-President, Andre Ludik and the new President, IPF Technical Officer, Hannie Smith. When you hear the name Johan Smith one tends to think of the following: The highlight of the competition, winner of the Overall Junior and Senior men, former World Sub-Junior Champion and just returned from a knee operation. Johan (100kg) who Totaled 810kg (504.32 Wilks) broke the Senior and Junior Total record with a deadlift of 280kg, he had a bench of 200kg and what everybody probably would say the highlight was, was his squat of 330kg! The crowd was really supporting him and gave a standing ovation. He is one of the jewels in SA and World powerlifting today. 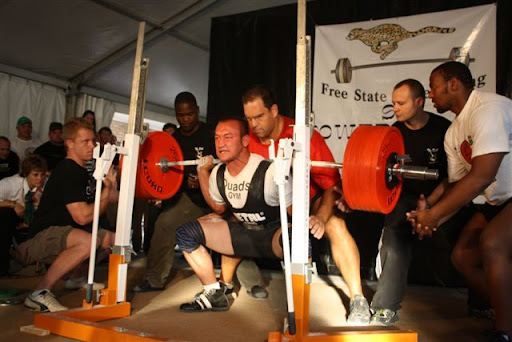 In the 67,5kg class Sanet Momberg returned from injuries to win the gold. She totaled 422,5kg, which included a squat of 140kg, a deadlift of 155kg and an amazing SA record in the bench of 127,5kg! She won the Overall Senior for women. With a very successful SA Championships the IPF Open World Championships that will be in South Africa in November would be without a doubt truly amazing! The SAPF would also like to thank Pieter Erasmus for putting up the amazing competition. Complete results. Photos Powerlifting Watch thanks Heinrich Janse van Rensburg for the submission.

Thanks Eric for posting this! From the experience of this competition the IPF Open Worlds is really going to be great! Heinrich Janse van Rensburg IPF Media Assistant SAPF Media Liason Officer
Great photos. I enjoyed them. Looks like a great venue with top-notch equipment and lifting. Robert Crawford U.S.A.